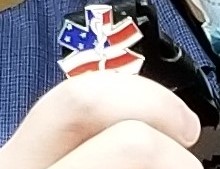 The Star of Life pin EMD James Sallup (J.P.) wears on a lapel is in the shape of a snake wrapped around a rod, and it is recognized as a logo for medical first responders.

The story behind the symbol is what really makes the pin so significant.

The pin’s symbol is called the Rod of Asclepius and takes its name from the Greek god Asclepius, who is associated with healing and the medical arts. Why a snake wrapped around the rod? Suffice to say that Asclepius and his followers believed snakes remedial and their skin-shedding a symbol of rebirth and renewal.

A symbol of “rebirth and renewal” is the extremely fitting tribute to EMDs at Snohomish County 911 (Washington, USA) like Sallup who provided MPDS® instructions for CPR to a bystander in the presence of an individual in severe respiratory distress. J.P. and the bystander worked in tandem to maintain life while awaiting field response and in the absence of Narcan.

The specific incident involved an overdose of the powerful synthetic opioid fentanyl. Despite the caller’s apparent anxiety in providing CPR, Sallup provided reassurances during an estimated five minutes on the call with a caller who, J.P. said, “was listening well and following instructions.”

J.P. does not know the outcome, whether the patient survived, and was likely onto the next call shortly after responders took over.

Hattie Schweitzer, who oversees training for Snohomish County 911, said Sallup’s temperament shined. “He transcended the moment. He did a great job.”

J.P. is modest in the telling. Nearly five years into the profession following an airport TSA position, he said he finds emergency communications rewarding. He likes helping people. Sallup appreciates recognition, although he doesn’t accept all the credit.

“Biggest thing is my co-workers and without them I couldn’t do this,” Sallup said. “We look after one another. A difficult call and there’s always someone to talk to.”

“I really don’t think people understand how hard this job is,” she said. “They don’t always know if what they’re doing is helping. It’s like needing a sixth sense to what’s going on. Are the callers receptive to what’s being said?”

J.P. had reservations about the work at the start. Was this for him? Could he do this and go home at shift’s end leaving the work behind? The MPDS Protocol, policies, and procedures put every calltaker on the same level and provided consistency, but it’s the unknown that takes getting used to. While wanting to help someone came naturally, Sallup had to accept not knowing the outcomes of most situations and realizing that no day is normal. Every day, every call brings new challenges. He learned early not to get “stuck” on a call, go on to the next, and rely on his training to do things the right way.

“It’s still very stressful knowing so many lives are in my hands,” Sallup said. “It gets easier, but it takes time. With training support and co-worker support, you get there.”

Schweitzer said it doesn’t happen overnight for anybody. “I assure them you’re going to get there. This is incredibly important work. They are doing good in the world. What would we do without them?”

Snohomish 911 reviews every CPR call as part of the QA process. As long as the call is compliant and CPR is provided, the Chain of Survival pin is awarded “regardless of what happens downstream,” said Terry Peterson, Deputy Director, Snohomish County 911. “The point is to recognize the meaningful work of our dispatchers,” he said. “Consistent compassion with callers resonates. The EMD is first in the chain. You may not end up saving a life, but you’re setting the stage for the best possible outcome.”

Sallup is among several EMDs who have received a Chain of Survival award, and they are highlighted on the center’s Facebook page at facebook.com/sno911.