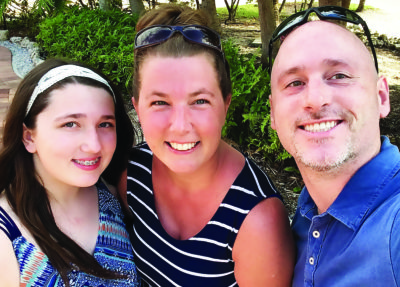 IT TAKES A SYSTEM

At 40 years old, Jennifer Quinlan wakes up every morning grateful to be alive and acutely aware of how she might not be if events had transpired differently on the morning of Jan. 24, 2016. It takes a village—or in this case, a system. The Maine Emergency Medical Services system: a coordinated, choreographed network of EMS providers, each with the training and skills to perform their specific roles, and bringing compassion and professionalism to their part of the collaborative effort.

It’s a story that Jennifer, a former high school English teacher, and her husband, Michael, with whom she works at their small Caribou accounting firm, now want to share with other Mainers as one way of expressing their gratitude to the EMS providers who made all the difference.

On that January morning, they had no idea that one of Jennifer’s cardiac arteries was 95 percent blocked—and that without intervention, her heart was about to shut down permanently.

Michael takes up the story, because now, looking back, his wife remembers nothing of what happened for several days before and weeks after the incident.

Before retiring the night before, Jennifer mentioned experiencing a heavy feeling in her chest—and Michael’s Google search came up with “heart attack” and “panic attack.” Concerned, he suggested they make a trip to the emergency room—but Jennifer was not enthused at the prospect, and recalled how she had resolved the same discomfort a few weeks earlier by shifting her position and turning on her left side.

Eventually they both fell asleep. But Michael awoke around 2:30 a.m., alarmed by the sound of something like deep snoring coming from Jennifer. He recalls that he had to shake her vigorously and repeatedly before she finally woke up. She got out of bed to use the bathroom, came back, and promptly went back to sleep. He walked around to her side of the bed.

“We need to go the emergency room,” he urged. “I almost couldn’t wake you!” Soon after, she again became unresponsive.

“The dispatcher asked me a few questions, and then he told me, step-by-step over the phone, how to clear her airway and perform chest compressions,” he said. “I could tell he was also letting someone else know we needed to get an ambulance here to the house.”

Some 175 miles away, in Bangor (Maine), Emergency Medical Dispatcher David King was nearing the end of his overnight shift when Michael’s 911 call came in to the Penobscot Regional Communications Center.

(For cost effectiveness, Aroostook County contracts with the PRCC to answer incoming 911 calls, process the information, and relay it to the appropriate Aroostook agency to respond.)

“Following our ProQA Emergency Medical Dispatch Protocols by asking the husband a few questions, we were able to quickly establish the location of the emergency and confirm a callback number, and determine that his wife had collapsed, had lost consciousness, and was not breathing,” King explained. “The next step was to get resuscitation going ASAP by talking Michael through CPR to try to keep Jennifer’s oxygen supply flowing while waiting for EMS response.

“In our position, since we are not there in person, we have to rely on what the individual at the scene is telling us for information,” King continued. “We need to be able to convey instructions, and have them relay what is happening as it unfolds.”

“Understandably, under the circumstance, people are sometimes so upset or hysterical that we have to ask them to find someone else to take over on the phone,” King said. “But Michael Quinlan was great to work with—I’m sure he was scared and anxious, but he was able to communicate and process information, and to stay focused, to save his wife’s life.”

Under King’s steady, calm direction and encouragement, Michael continued to administer CPR, including mouth-to-mouth resuscitation when hundreds of chest compressions alone did not suffice.

“It felt like five years,” Michael recalled solemnly. “But I know it was less than 10 minutes before the first paramedics arrived.”

He said as the sirens approached, he felt torn about leaving Jennifer’s side even just long enough to race to unlock the front door to let the crew in.

At this point, in accordance with their protocols, a second Caribou ACLS crew was dispatched to respond to the confirmed cardiac arrest.

Awakened by the commotion, the Quinlans’ 13-year-old daughter, Alaina, was settled into another part of the house to be spared witnessing her mother in such dire circumstances.

“I’m extremely proud of all of my people,” said Susi, who emphasized how teamwork makes all the difference. “With no time wasted, in the end we can look back knowing we were part of the team that provided the full circle of treatment that saved a life.”

Thanks to their training, each crew member knew where to station himself and what needed to be done. Medications were administered intraosseously (injected directly into the bone) when it was impossible to start an IV. CPR was restarted and defibrillation was administered as many as six or seven times, until ROSC (Return of Spontaneous Circulation) was achieved.

After the patient regained a pulse, she was transported to Cary Medical Center for further treatment and stabilization. But when it became apparent that Jennifer was critically ill and needed more definitive care, “We were called back again, because Caribou Fire and Ambulance also runs an air service,” Susi said.

Jennifer was loaded, with fresh crew, onto their fixed wing aircraft and flown to Bangor International Airport. Bangor Fire Department EMS personnel David Rudolph and Ryan Taylor were waiting there to transport her by ambulance to the Eastern Maine Medical Center catheterization laboratory.

It was not until a debriefing, weeks later, that Jennifer discovered that one of the Caribou paramedics who helped to keep her alive by defibrillating her three more times aboard that air ambulance was actually Adam Chartier—a former high school student of hers. Also monitoring Jennifer’s condition and providing care en route were Flight Nurse Chris Zappone and Respiratory Therapist Tammy Susi.

“I’m so thankful that everyone who helped me that day chose to go into emergency medical services as a line of work,” Jennifer said. “The entire crew was amazing, so skilled and utterly professional, and there were so many, many people involved—I just can’t say enough about how thankful I am.”

Now further along in her recovery than anyone anticipated just a few months after her ordeal began, “In some ways I’m even healthier than I was before the heart attack,” Jennifer said. “And we certainly have a renewed appreciation for each other and those we share our lives with, for health, and for life.”

And perhaps the best medicine of all is gratitude—thankfulness for this happy ending.

“After our life got back to more-or-less normal, we were determined to go to the fire station to meet some of the people who made all the difference that day, and to express our appreciation,” Michael said. “We wanted to bring a token gift—coffee and donuts, or something—but what do you bring to a group of people who saved your wife and your daughter’s mother?”

Susi assured them that their visit was the best thing they could have done. King agreed.

“Most of the time, we don’t get to learn how things worked out,” he said.

And everyone agrees that sadly, even despite following procedures and everyone’s best efforts, the outcome is not always what one would wish for. Though he has given CPR instructions over the phone at least 10 or 15 times in his seven years of experience as an Emergency Medical Dispatcher, this is the first case King knows of where the patient has made a full recovery.

One of the pictures Jennifer will always bear in her mind: a sobering statement made by one of the crew members at the informal reunion: “After we did everything we could for you, and handed you over to the next caregivers, it was an unforgettably long, quiet ride for all of us back to the station.”

From an EMS point of view, this call ran impeccably, “like textbook Advanced Cardiac Life Support,” according to Drexell White, Maine EMS’ longtime EMD Program Manager who has reviewed many calls, and who also personally followed up with the Quinlans after this remarkable incident.

“Talking to Michael was an emotional experience,” White said. “It really hit home to hear him say that our EMS system didn’t just save her life; it saved their world.”

Editor’s Note: This article first appeared in the Maine EMS Week 2016 special section published by the Bangor Daily News and distributed throughout Maine on May 13, 2016. It is reprinted here with the gracious permission of the author, the Quinlan family, and Maine EMS.