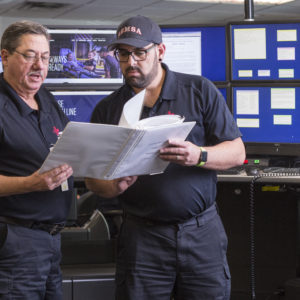 You’ve heard the saying, “Put your money where your mouth is.”

In other words, act on what you say if you want your words taken seriously.

It can be a circular argument, particularly when there’s no money to support even the best intentions. Without appropriate funding, the words die on the vine.

That’s what stalled—for many agencies—the vision of EMS published in 1996. The problem was solved, partly through a federal initiative and a lot through agency ingenuity, to corroborate an updated vision of EMS for the year 2050.

Unfortunately, there was little funding available to satisfy the ambition until nearly 15 years later.

A fully integrated system, however, is the way it has to be, according to EMS providers.

REMSA and MedStar Mobile Healthcare, in Fort Worth, Texas (USA), are both on the forefront of EMS innovation with programs designed to meet community health needs. So far, they are receiving high marks from both the health care providers along the continuum of care and the public.

And the story takes off from the historic, dramatically game-changing, and controversial Patient Protection and Affordable Health Care Act (ACA) that President Barack Obama signed into law on March 23, 2010. The Act addressed more than a divisive health insurance program for low-income members and vulnerable populations. The ACA also encouraged development of innovative health care delivery models that could and did accelerate coordination across the continuum of care.

The Center for Medicare and Medicaid Innovation (CMMI), within the U.S. Department of Health and Human Services, established and funded up to $1 billion in awards and selected proposals most likely to achieve a triple aim:

CMMI reinforced the 1996 proposal and, also, supported EMS into the future, as reflected in the preamble of the 1996 and EMS 2050 project (projected for release in 2018). It’s people-centered. (See sidebar for entire vision statement.)

Reasons agencies applied for grants depended on several variables, including available funding and the independence to establish programs with fewer restrictions. REMSA developed and implemented its programs using CMMI grant money and created a sustainable base postgrant. MedStar used its own funding to generate immediate buy-in from insurers and providers associated with the programs established. 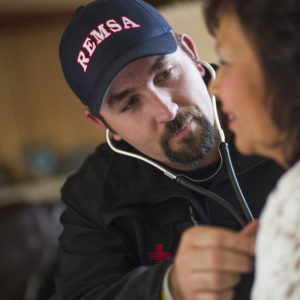 In 2011, REMSA, a non-profit EMS provider serving Reno and northern Nevada, was one of 107 health care entities selected for a CMMI Healthcare Innovation Grant among nearly 3,000 applicants. It was the only one of six EMS agencies in the nation to receive the funding.

One patient’s story illustrates how the components work together.

Adam (name has been changed) was calling 911 two to three times a month and based on his medical complaint subsequently transported by ambulance to the emergency department. The emergency department physician easily satisfied Adam’s request without intervention and with full knowledge that the same treatment could have been achieved through a primary care provider.

He was calling 911 to get his medication refilled.

The system’s hands were tied. Adam’s complaint—although not medically proven—qualified him for ambulance transport, and once in the emergency department, the physician was obligated to refill the prescription but could not make referral to a primary care provider. Adam wasn’t taking advantage of the system. He didn’t understand how the system worked.

“Like many, he wasn’t aware of the services available,” Staffan said.

Fortunately, REMSA was there for him and ultimately fostered his independence through the community paramedicine and the alternative destination transport programs.

In Adam’s case (a frequent user), a community paramedic helped Adam sign up for Medicare benefits, and through REMSA’s alternative destination transport program, Adam was introduced to the Community Health Alliance (a REMSA clinical partner), where he connected with a primary care provider.

The alternative destination transports (launched in December 2012, year one of the grant) gives patients options other than going to hospital emergency department after advanced paramedic assessment in the field. This includes transport to urgent care centers, non-emergency care clinics, detoxification centers, and mental health facilities. REMSA’s clinical partners peaked at 16 during the grant.

In addition, Adam was assigned to REMSA’s Hot Spotter program, an outreach service for low-acuity patients, which includes a 30-day period to assist in follow through. A community paramedic periodically checked up on Adam, making sure his needs were met.

Over the next six months, Adam dialed 911 once.

“Since then, he hasn’t called at all,” Staffan said.

A possible extension for Adam is the third component: a 24-hour nurse health line, in effect since October 2013 (the grant’s second year), accessed through a dedicated seven-digit number or by calling 911.

REMSA uses the Emergency Communication Nurse System™ (ECNS™) for vetted low acuity ALPHA and OMEGA Determinant Codes (based on Medical Priority Dispatch System™, MPDS®, approved codes). Because REMSA is a medical Accredited Center of Excellence (ACE), which represents high compliance to MPDS Protocol, the ECN can determine the care and response most appropriate for the situation (such as the Community Health Alliance).

“We projected 250 calls a month, and after the first four months, we were averaging 2,000 calls [to the nurse health line] a month,” she said. “Patients can get the help they need over the phone and, as our outcome data shows, the system saves by avoiding emergency department visits and ambulance transport.”

During the four years of the grant, ECNS received 65,000 calls.

While the grant amount and programs varied among recipients, REMSA turned its $9.1 million award into a program that generated notable savings.

According to the program summary:1

Over the four-year grant, REMSA’s Community Health Programs saved $9.66 million in health care payments, compared to $9.06 in program expenditures. By year four, the program achieved an 84 percent return on investment, avoiding $1.84 in payments for every $1 in expenditures. They exceeded the overall goal of improving access to appropriate levels of quality care by 40 percent and reducing total patient care expenditures by seven percent.

Savings were recognized from improving care and referral options and reducing unnecessary utilization of emergency and hospital services, including a decrease in the percentage of emergency department transports that were classified as low priority.

In addition, the first four years of the program resulted in:

Note: Estimates were calculated based upon average charges from data provided by the Nevada Center for Health Statistics and Informatics (this was an independent evaluation REMSA contracted), in addition to CMS formal review.

The grant ended in 2016, but certainly REMSA interventions have met and exceeded the triple aim objectives.

The initial three programs are still in full force and expanding into other underserved areas, which, according to findings, were high users of the nurse health line and alternative destination transports. The Community Health Alliance, which is a federally qualified health center, is among 10 clinical partners in northern Nevada. Nevada Medicaid and Hometown Health (a not-for-profit insurance company) cover alternative transports costs for their clients, and a growing number of providers are referring patients to the nurse health line.

In addition, REMSA is helping to ease a shortage of emergency medical services in rural Tonopah in Northern Nye County (between Las Vegas and Reno). In March, REMSA launched an exclusive seven-digit Nurse Health Line for residents and provides a locally-based community paramedic.

REMSA in the present is the forecast of the future.

“As health care evolves, insurance won’t cover care that is unnecessary or care that could be provided at a lower cost,” Staffan said. “It’s the future of EMS to the benefit of the entire health care delivery system and the patients the system serves.” 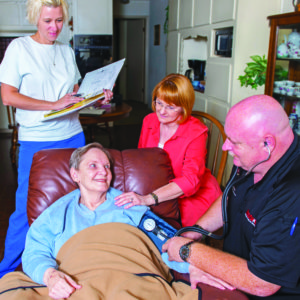 Going above and beyond traditional EMS was a concept long considered, although cost prohibitive for most ambulance services due to the funding models in place.

“Community health was something a lot of us thought about, but it was difficult to get it going,” said Matt Zavadsky, Chief Strategic Integration Officer, MedStar Mobile Healthcare, Fort Worth, Texas (USA). “We relied on a fee for services transport to the hospital.”

Most insurance companies (federal and private) use a fee for service schedule on behalf of members to cover the cost of pre-hospital emergency care (basic and advanced life support). The Balanced Budget Act of 1997 established a national fee schedule under Medicare Part B, which private insurers more or less incorporated into their coverage plans. Reimbursement depends on transporting the patient to the hospital. Medicare does not reimburse ambulance service that does not result in hospital transport. An empty ambulance is non-refundable.

And whether the patient is in a car wreck or seeks medical attention for a sprained ankle, ambulances will respond when a 911 call is received. The expense associated with low-acuity calls, rising expenses, and flat reimbursement affects not only EMS. The entire chain of survival—from dispatch to hospital care—feels the pinch of high costs for inappropriate use of emergency medical care through system overuse and public misunderstanding.

MedStar came up with solutions, starting in 2009 with a pilot program to provide more appropriate services for frequent EMS callers.

But first, we’ll start with a recent project implemented in March 2018. It’s the first of its kind method to flip traditional federal, private, and nonprofit fee for service transport and Medicare’s ambulance pre-authorization requirements. In a roundabout way, MedStar is leaving the decision to the patient through an advance payment plan negotiated between MedStar and one of the area’s largest insurance providers.

Zavadsky calls it “out-of-the-box” innovation, similar to MedStar’s approach to create a community of vested providers and better patient outcomes. Instead of reimbursing MedStar using the traditional ambulance transport fee for service model, the insurer provides direct deposit per insured member, per month for members in MedStar’s service area. This capitated economic model compensates MedStar for clinically appropriate patient navigation. MedStar’s personnel conduct a patient assessment and work with the patient to determine transport and destination.

“We offer alternatives,” Zavadsky said. “We can arrange Lyft to take the patient to a clinic or urgent care and bring the patient back home again.”

MedStar covers alternate transport costs through the capitated fee schedule. The patient is not billed. A claim isn’t filed with the insurer, regardless of the type of transport arranged and that includes ambulance.

“This model allows us to say, ‘It’s terrible this happened to you, but let’s get you to the most appropriate place.’ It’s people centered, and in the long run, payers and providers save money, and we’re creating much happier patients.”

Start of something big 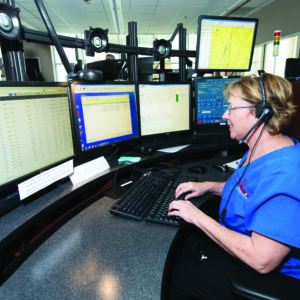 The capitated fee plan for transport is the most recent innovation among MedStar’s many alternative “into the future” programs.

The first, implemented in 2009, addressed a situation EMS agencies share nationally: frequent EMS users. In 2008, MedStar made 2,000 trips for 21 patients, costing $962,429 in ambulance charges and the majority of the bills went unpaid.

The high user targeted program, which MedStar funded, targeted 21 high users (15 or more 911 calls in 90 days), most of whom had co-morbidity health issues (such as heart failure, diabetes, COPD) and turned to EMS for help for even minor medical issues such a filling a prescription. Rather than continue the unnecessary transport to an emergency department, MedStar enrolled patients into a 90-day program and developed individual care plans that included scheduled home visits by Mobile Healthcare providers for medical assessment and care plan checks. They put a calendar at the patient’s home, mark off the 90 days, and hand out certificates at their graduation.

A second successful program, implemented in 2012, is the Academy’s Emergency Communication Nurse System™ (ECNS™). Low-acuity 911 callers, determined through MPDS interrogation, are referred to a certified ECN in MedStar’s communication center who helps the patient find appropriate resources for their medical issue.

Innovation and demonstrating the true value for EMS is the way of the future, Zavadsky said.

“It’s taken 20 years to get EMS the direction it should go,” he said. “MedStar is still evolving and becoming more robust and more responsive to the needs of our patients.”

You can find a summary of MedStar’s Patient Navigation and Mobile Integrated Healthcare at http://www.medstar911.org/mobile-healthcare-programs.