The International Academies of Emergency Dispatch® (IAED™) began preparing for the 2022 iteration of its annual NAVIGATOR conference quite a while ago. While you were in the midst of your 2021 experience, the NAVIGATOR crew was already working on the details it takes to put on a spectacular event for you a year later. To say we get major satisfaction seeing and hearing you have a great time during that week would be a major understatement!

At the Opening Session of the 26th NAVIGATOR, IAED President Jerry Overton marveled at the changes and progress that have been achieved over the last year. The College of Emergency Dispatch celebrated its 1 millionth CDE credit hour being earned. There are now more than 200 Accredited Centers of Excellence (ACEs) across the world, including four Emergency Communication Nurse System™ ACEs. Angela Huddle was named the new chair of the Police Council of Standards, and Claude Marie Hébert was named the new chair of the ED-Q Council of Standards.

Overton also finally revealed an announcement we’ve been anxiously waiting to make—there is a new Dispatcher-Directed CPR (DD-CPR) course available on the College! We’re changing how emergency dispatchers earn their two-year CPR renewal for EMD recertification. New EMDs will still take the usual hands-on CPR course when they are certifying for the first time, but everyone else can enjoy this free one-hour course that provides call simulations adapted to your non-visual environment. Within 24 hours of being announced, hundreds of people had taken it, giving glowing feedback. Learn more on the College of Emergency Dispatch!

With NAVIGATOR comes the chance to celebrate the profession’s best of the best in person. At each of the general sessions bookending the week, accolades and awards were given to the 2022 Instructor of the Year, Dispatcher of the Year, Research Poster winner, and Dr. Jeff J. Clawson Leadership award recipients.

Instructor of the Year

Charles Stewart with NorthStar EMS (Tuscaloosa, Alabama, USA) was named the 2022 IAED Instructor of the Year. Stewart is one of NorthStar's founders and is its current Director of Education and Quality Improvement. He's been a medic for over 30 years and a certified EMD since 2012. In 2014, he became an in-house instructor and regional instructor for the Academy after helping his center achieve ACE status. Eric Fayad, the IAED’s Associate Director of Instructor Services as well as the award presenter, said that when COVID struck in 2020 and classes were switched to primarily being remote, Stewart really stepped up; in the past year, he's taught 47 courses in addition to his full-time duties at the center. 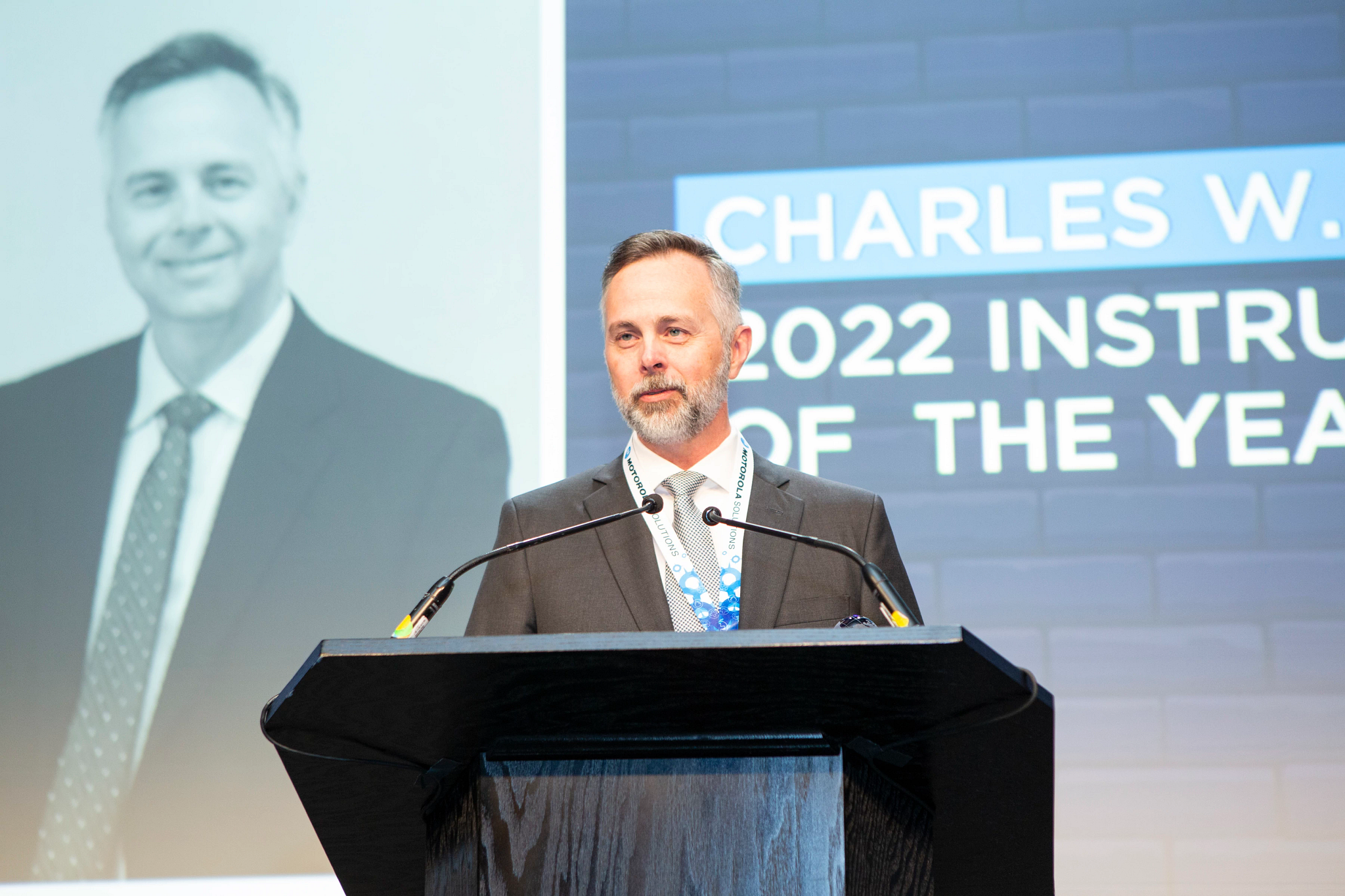 When asked what the most disappointing part of being an instructor is, Stewart said it’s when students who have paid attention and asked questions miss passing the test by one or two points. Alternatively, the most satisfying part for him is when he sees students really understand the material and, consequently, do well on the test. He has a real passion for helping people learn.

Stewart advises new instructors to dive in! “Get to know all the details, all those Rules and Axioms that govern everything we do.”

Dispatcher of the Year

The 2022 IAED Dispatcher of the Year is Marlynda Dixon with Johnson County Department of Emergency Services (Olathe, Kansas, USA). Dixon is an Operations Supervisor and has been in dispatch for nearly 23 years now, 17 of which has been with Johnson County. She had no idea she’d even been nominated and was “so confused and shocked” when she learned she was Dispatcher of the Year. Later, after she was able to process it, she was very excited. 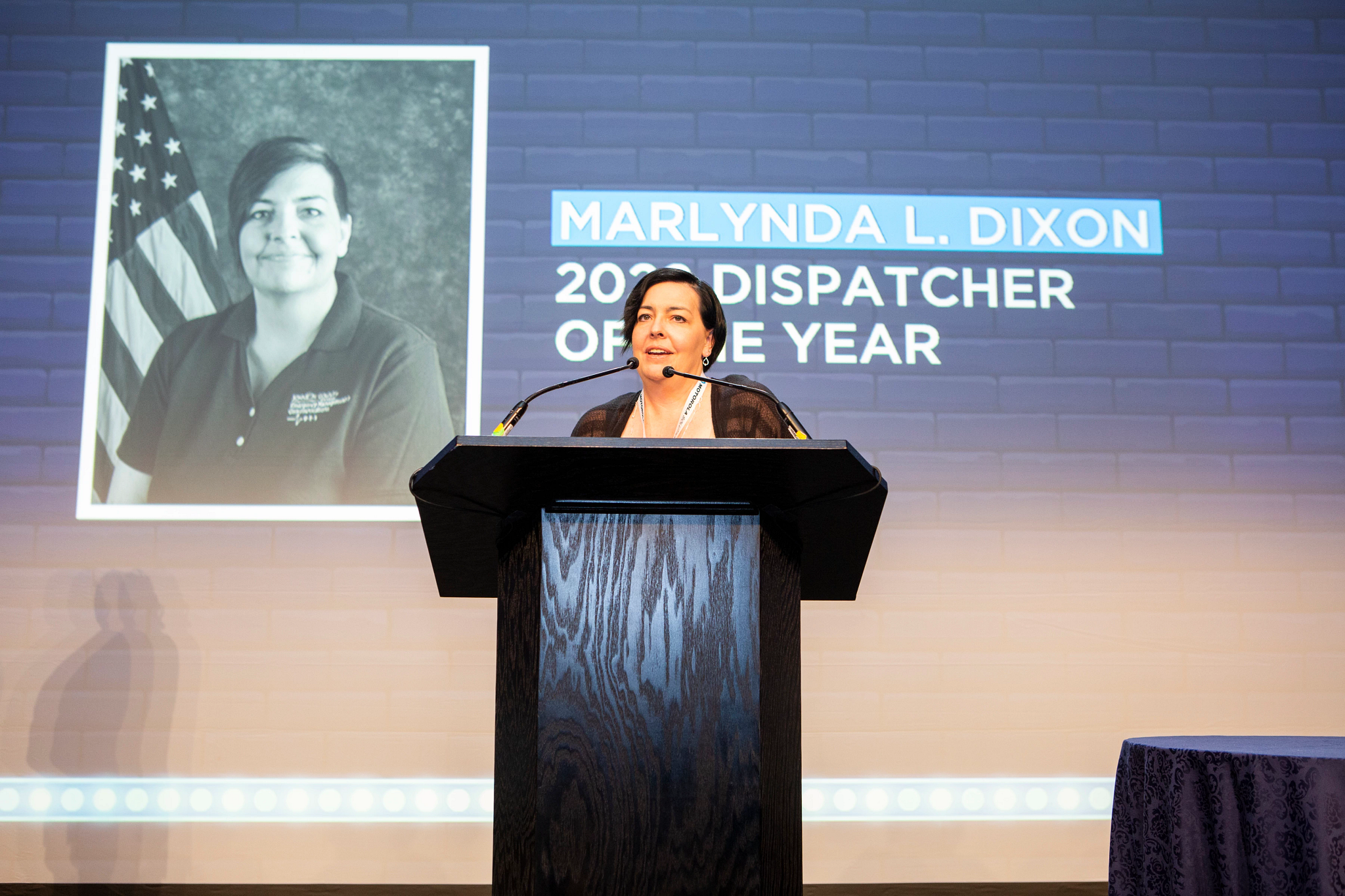 As a supervisor and a member of the QAU, Dixon maintains an awareness of everything happening with her team while also answering calls and handling radio traffic. Her exceptional work is summed up by a quote from the center's QI Supervisor Jessica Dorn:

“As I listened to all of the heroes on your shift process calls for the last two weeks, I noticed a common denominator—compassionate care and exceptional customer service. It is impossible for me not to recognize that there is a direct correlation between your team members’ customer service and YOUR emphasis on providing compassionate care to the caller. Thank you for setting the bar high and encouraging others to surpass the bar by being the example. Greatness is contagious, and you have helped it spread to your whole team!”

In the vein of being an example, Dixon has the following advice for new and seasoned emergency dispatchers alike: “Talk about a call if it bothers you. Don’t keep those feelings bottled up. Secondly, always talk to your callers in a way that you would want someone to speak with your loved ones.”

Out of the 13 research posters displayed at the conference this year, the one selected as the best was "Next Generation 9-1-1 Media & Your Telecommunicators' Mental Health," which was written by Fitch & Associates' 2021 Communication Center Manager (CCM) Course graduates Richard Buck, Kathy Boucher, Patrick Clark, Johnathan Danek, Lori Lagrone, Tameka Minter, Raymond Schultz, and Adair Welfel. 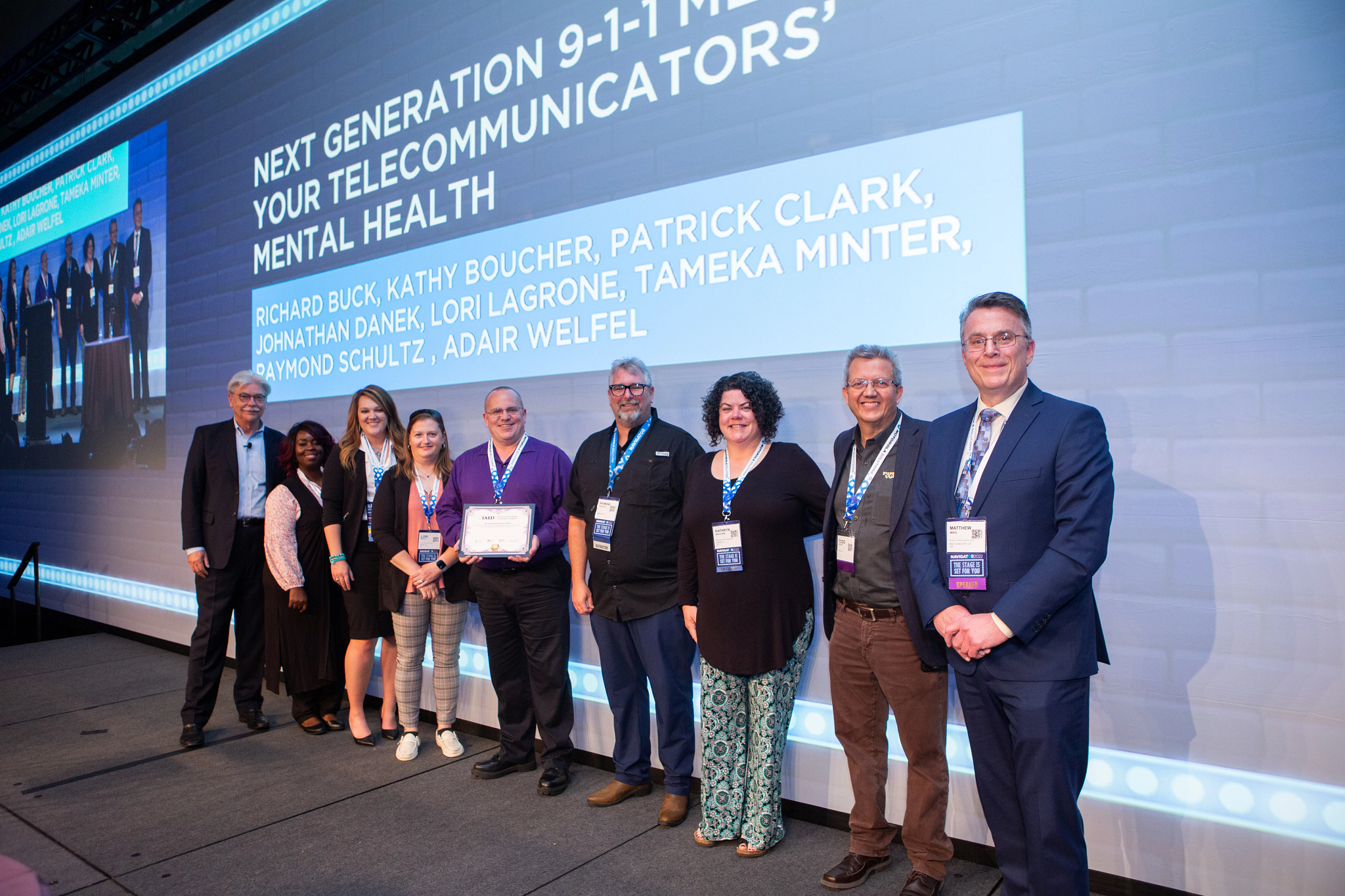 Matthew Miko, IAED’s Director of Academics, Research, and Communications, who presented the award alongside Todd Stout, FirstWatch’s Senior Partner, commended the group for “Asking questions we don't need to know the answer to right now, but we'll really need to be thinking about it soon.” These researchers asked how Next Generation 911 will impact the mental health of emergency dispatchers. More and more information is becoming available in dispatch, like pulses recorded by smartwatches and even video feeds. It’s already a taxing profession—how will those developments impact its current challenges?

The poster was based on solid data, the study was designed well, and the conclusions are widely applicable globally. You can check it out here.

There were TWO recipients of the 2022 Dr. Jeff J. Clawson Leadership award, both of whom have many years of experience bolstering the people around them.

Ross Rutschman is a Fire and Medical Program Administrator for Priority Dispatch Corp.™ Rutschman has been involved in public safety for over 41 years and works as an integral part of the implementation teams in Hong Kong, Malaysia, Italy, China, Vietnam, Brazil, Lithuania, and the Middle East. Fun fact, his EMD number is 3. The only living person with a lower number is Dr. Clawson himself.

Doug Smith-Lee is a Program Manager for Clark Regional Emergency Services Agency (CRESA) and administers the accreditation and quality assurance program for the agency. He led the agency in becoming the 4th-ever Accredited Center of Excellence! While at CRESA, Smith-Lee also administered a paramedic ambulance franchise contract for the county and four cities in Clark County, Washington (USA), for 23 years. Prior to joining CRESA, he coordinated the implementation of Oregon’s Ambulance Service Area plans and worked as a paramedic in the Portland and Vancouver metro area.

In addition to the award, each recipient received $500 for the charity of their choosing. Smith-Lee chose the Beyond the Badge Foundation, whose mission is to promote and build strong relationships between the local community and law enforcement through charitable and volunteer work, and Rutschman chose Pacific City Dorymen’s Association, a foundation dedicated to ensuring the continued existence of dory activity in Cape Kiwanda (Oregon, USA).

Learning as you go

With over 1,500 attendees from seven countries and 145 sessions in 12 tracks, there was certainly no shortage of opportunities to learn new principles and sharpen existing skills. The NAVIGATOR+ track gave attendees a little bit of everything, from research to Q troubles to pandemic-specific presentations. Dr. Gordon Giesbrecht (Professor Popsicle) gave an update on sinking vehicle research, the findings of which will be released in the next version of the Fire Priority Dispatch System™ (FPDS®).

One theme that stood out was connecting with callers. Over the past two years, emergency dispatchers have noticed callers have become less patient. Now more than ever it’s important to be able to handle calls with both professionalism and empathy. Melissa Colon and Heather Hedgcock with Manatee County ECC and Ariana Kitty with Northwest Central Dispatch System (NWCDS) and Robin Chamberlain with PDC™ presented ways that calltakers can minimize caller frustration while also complying with the protocols. Teach your emergency dispatchers how to listen actively and professionally interrupt callers before things get out of hand.

Party in the USA

What’s NAVIGATOR without parties? Yes, we hold the conference to give you an opportunity to network and learn, but we also want you to have fun! The Exhibit Hall Opening Gala, Attendee Party, and ACE Reception are designed to let you cut loose among people who know the kinds of things you’ve gone through professionally. 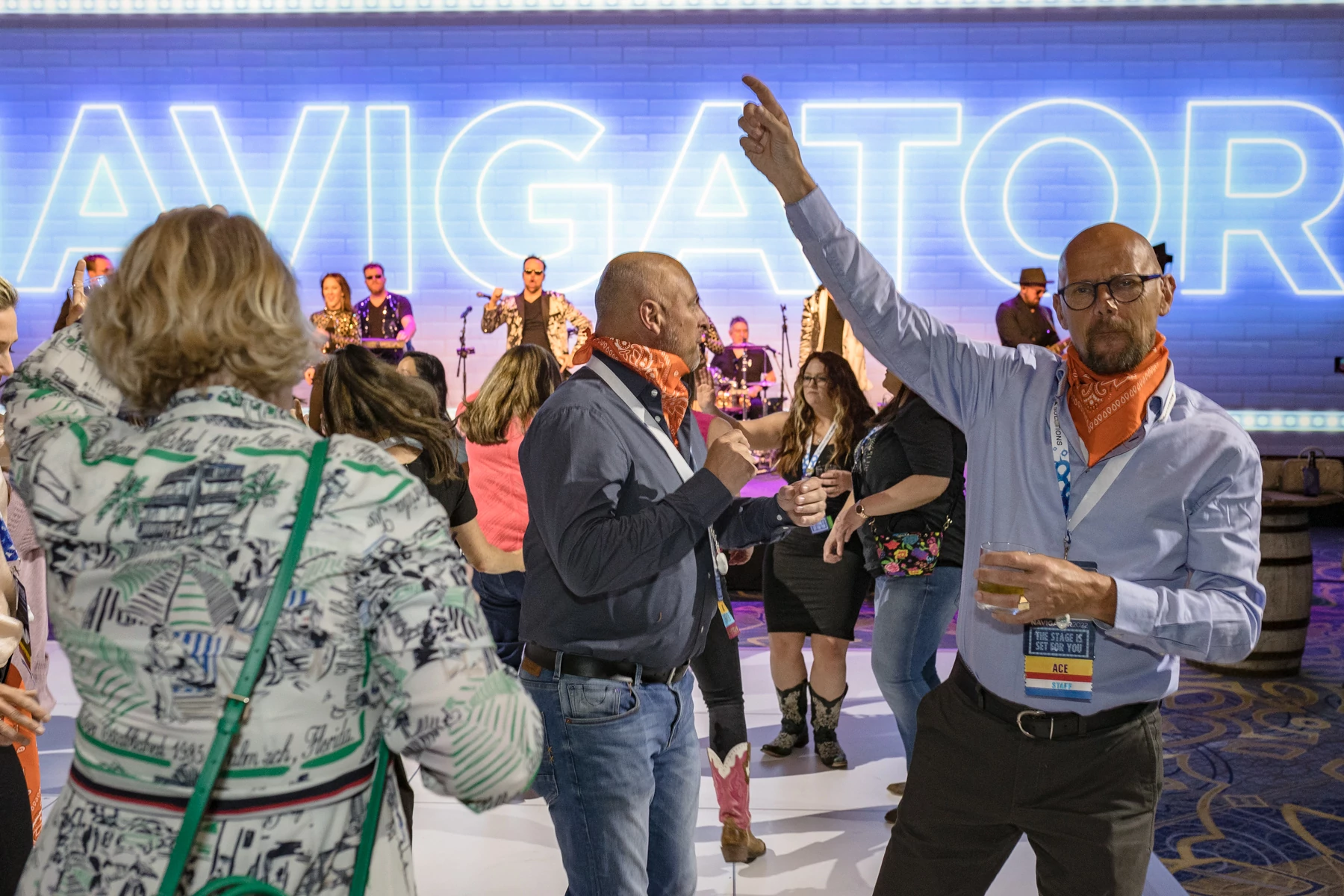 The Exhibit Hall Opening Gala (sponsored by CentralSquare) gave attendees the chance to see what emergency dispatch goods and services are available and ask their representatives any questions they might have. It was also a chance to pick up some sweet, sweet swag, including the incredibly popular purple socks we gave away at the IAED booth.

The Attendee Party (sponsored by Carbyne) was a little less business-oriented. If networking did get done, it was between playing cornhole, snapping pictures at the photo booth, or singing along with the energetic live band. We saw more than one cowboy hat and a pair of leather chaps or two.

As for the ACE Reception? Those celebrating the hard work their center does each and every day to make sure every call exceeds expectations brought out their dressiest togs. OnStar sponsors this event, making sure the champagne glasses and decorations sparkle as brightly as the attendees.

Tim Nichols, award-winning songwriter, sent us off and wished us happy trails with a few songs and stories, including a rendition of his hit “Heads Carolina, Tails California” (sung by country singer Jo Dee Messina). There’s not much crossover between songwriting and dispatching, but both professions have a foundation of getting the words right. He even wrote a song for emergency dispatchers, which you can view on the IAED Facebook page.

As for next year, we’ve already started planning! Come join us in Denver, Colorado (USA), April 18-20 to experience all this and more in the mile-high city. Whether you’ve been nine times or not at all, we look forward to seeing you! Happy trails!