Two of my co-workers gave me a sign that reads, “GO THE EXTRA MILE—It’s not crowded there.” I was flattered—it seems I have a reputation as someone who’s not content with being average.

Our jobs have their frustrations. Callers and even responders frequently don’t appreciate what we’re doing or why, even when it’s in their own best interest. One popular internet site is full of humorous cards with sarcastic messages directed toward both groups. (If only we could send them to a few choice people.) When we get genuine appreciation from anyone in our business, it can give us a real boost.

Surprisingly, the instances where I’ve seen and experienced the most appreciation from our “customers” wasn’t from saving a life or something else definitive. It was from nothing more than going a little above and beyond.

I work in a regional communication center, and we handle the full spectrum of emergency and non-emergency calls. Recently, a trainee I was with took a call from a man whose car had been towed after being pulled over for a motor vehicle violation. He was trying to find where it had been towed to so he could get it back. The problem was, he didn’t know when it happened because he couldn’t remember. It was several weeks ago, and he had a lot of problems to deal with before he got back to his car—and had lost the paperwork in the interim. Our Records Department was closed, so our search options were limited to CAD. A cursory check revealed no calls that fit the profile, and we told him as much. It would have been very easy to say, “Sorry, without more information we can’t help you.” Instead my trainee said she’d look a bit further and stayed on the phone another five minutes looking back through a few weeks’ worth of calls. That didn’t yield any success either. So imagine my surprise when the same man called back an hour later to tell her that he still couldn’t find his paperwork but wanted to say “thank you” again for how much she tried to help him. 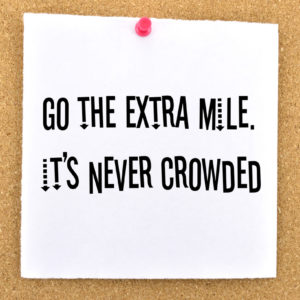 Yesterday another one of my co-workers took a call from a suicide hotline elsewhere in the state. They had just spent 45 minutes on the phone with a depressed female. The only thing they could get out of her before she finally hung up was that she lived in our county. Officially, there was nothing for us to do. But my partner decided to call her himself. The girl initially refused to give any information, but my partner eventually managed to establish a rapport to the point where she accepted his offer of transport to a crisis unit.

Often, going a little above and beyond for someone—even if the only appreciation you get is a brief acknowledgement over the radio—can make someone’s otherwise aggravating day better. And exceeding people’s expectations often isn’t hard to do, since customer service standards have plummeted to abysmally low levels in so many areas of our society.

Let’s also make a point of recognizing our partners when they perform exceptionally. My agency has a “Report of Exceptional Performance” that we initiated based on a similar form I was shown while teaching for Priority Dispatch® at Onondaga County 9-1-1 in Syracuse, New York, USA. (Thanks for the idea, Onondaga.) Anyone can fill it out, and it lets administration know about something that might otherwise go unwitnessed and unsung.

Delivering excellence isn’t hard to do. Go the extra mile routinely, and it becomes your standard. And as my new sign says, it’s not crowded there.