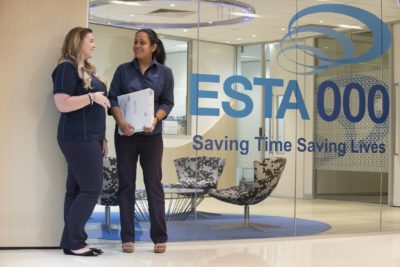 Saying the Emergency Services Telecommuications Authority (ETSA), in Melbourne, Australia, has had growing pains is an understatement.

The number of calls answered by the center covering all police/fire/EMS services in the state of Victoria keeps climbing, and it wasn’t too long ago that a report presented by then-Victorian Auditor-General John Doyle to the Victorian Parliament cited ESTA’s computer systems as a major obstacle in keeping up with the pace.

“Things were going really well prior to the transfer of regional communication in 2010 when we took on the entire state,” said Mark Richards, ESTA, Quality Improvement (QI) Manager, who started at ESTA in 2003 following an 18-year career with the New Zealand police. “That increased our call volume substantially, and things started to slide.”

Issues contained in the report focused on the future and ESTA’s ability to accommodate expected growth in call volume—at least 3 percent each year—considering ESTA’s information and communications technology. While ESTA was meeting its targets for dispatching fire and police, the same didn’t apply to ambulance dispatch. The report recommended an overhaul of calltaking processes.

At the time of the report, Richards was an EMD, EMD-Q, and Assistant Manager of the regional center in Ballarat (ESTA also operates a rural center in Victoria), with a growing workload that was displacing the time generally slotted for call case review.

“Once QA drops, so does overall quality,” he said. “Everything in the package suffers.”

The understaffed QI team could not keep up with the percent of case reviews required for emergency ambulance calls that had doubled to 500,000 per year over the past six years since a regional consolidation. Calltaking staff increased, which stressed the resources of the already overloaded training department. The CAD system was nearing the end of its operational life. Calltakers and dispatchers could opt out of training in support of the union’s industrial action to increase pay and improve conditions.

“The pressure was on,” Richards said. “The report cemented what was needed, and someone had to step up to drive the process.”

Richards took the initiative. In May 2013, following roles as a calltaker, dispatcher, team leader, and assistant center manager, he accepted the newly created position as QI Manager. He is responsible for operational staff quality improvement and provides investigative oversight in relation to adverse events and complaints.

His first task involved stepping back. He evaluated ESTA’s status, including certification—only 17 percent had current EMD certification—and the continuing dispatch education material available. Richards looked at EMS dispatch from the ambulance perspective. He checked all the boxes and realized the step forward for a proactive solution: becoming an Accredited Center of Excellence (ACE).

Knowing the direction, however, is different from charting the course.

“It was very daunting when we first started looking at the requirements,” Richards said. “But we had to start; we were under the microscope.”

He sought the assistance of professional contacts, and they gladly answered his call.

Priority Dispatch Corp. (PDC) Implementation Specialist Ruth Lloyd, who lives in New Zealand, led operation “ProQA Medical Priority Dispatch System™ (MPDS) v12.2” (ESTA is planning to advance to v13.0 when the ANZ version is released in 2016) after the union lifted the industrial action on training. Lloyd’s nearly four-hour flight every other week to Australia and either a 50-minute or 90-minute drive (depending on the site she was visiting) gave her a lot of time for planning.

“It takes some organizing to do what Mark wanted to accomplish,” Lloyd said. “I was actively involved for over 18 months for certification and accreditation.”

IAED Associate Director Carlynn Page, who was assisting a center in Australia achieve ACE, altered travel plans and met with Richards to demonstrate the online ACE accreditation tool. He said giving up his weekend to take Page up on her offer and learn the process was the “best decision.”

Page deflects recognition for the “minor” part she contributed.

“He gets the credit for his leadership,” she said. “The EMDs stepped up to the plate and worked through some really tough challenges. Mark and the EMDs are amazing.”

“The Academy was so supportive, it wasn’t funny,” Richards said.

Richards and Lloyd were the cheerleaders. He was ready to lead the ACE charge for the long-term gain, and she was ready to give the motivational reminders.

“I was constantly telling them about the full value they would be getting from the system,” Lloyd said. “ACE is not about the certificate you can hang on the wall. ACE is about mining the maximum potential from MPDS. I don’t care how big or small the center, we want them to use the MPDS the way it was designed to be used.”

Things started changing and for the better. EMD certification returned to nearly 100 percent (exceptions included employees taking long-term sick and parental leave) and recertification for everyone one day each year (June 30) to streamline the process. Case evaluations increased to the required one percent. Policies were scrutinized and updated. A greater number of CDEs were made available. In slightly under two years, from May 2013 to November 2015, ESTA accepted the ACE award twice: at Australasia NAVIGATOR 2015 in Melbourne and at NAVIGATOR 2016 in Washington, D.C.

The process taught Richards lessons about protocol and people. He discovered that most like the structure of protocol—it gives accountability to the individual—and want to do their part to protect the public. Once he had buy-in, he had drive.

And people like to acknowledge their success, Richards said.

“Reaching the goal was well worth any pain we may have experienced,” he said. “We celebrate what we achieved and continue to emphasize the importance of our work.”

Lloyd’s travel schedule now includes course and software instruction at several more MPDS sites in the region of Australasia/Oceania. ESTA, however, is a destination she will long remember.

“I am so proud of them,” she said. “They had a lot in front of them, and look what they did. ACE is a tribute to their hard work. We all truly had an incredible journey.”