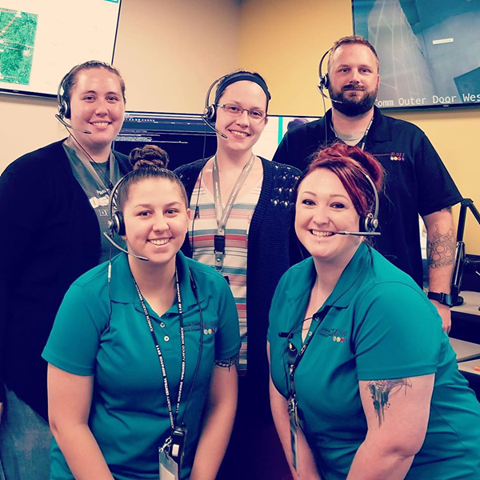 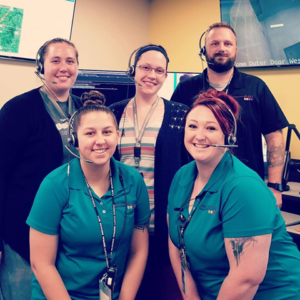 It’s not every day that an emergency dispatcher helps deliver a baby by giving childbirth instructions. In fact, some may go an entire career without experiencing this situation.

Imagine what LeighAndra Wilbanks’ thought when a caller reported to her that she was alone at home and in labor but hadn’t known she was pregnant.

But Wilbanks’ call was much more than this surprise delivery. It included amazing support from her co-workers, who were right by her side offering encouragement and ideas during the most stressful moments of the call. That team approach is typical during any given day at Johnson County 911 in Warrensburg, Missouri (USA).

Wilbanks had used the Medical Priority Dispatch System™ (MPDS®) Protocol 24: Pregnancy/Childbirth/Miscarriage before, but she had never made it very far before the ambulance arrived at the scene. She said during her two years at Johnson County 911, only one baby delivery that she knows of occurred while the emergency dispatcher was on the phone.

Wilbanks was barely into Key Questions when she heard the cry of a baby. The caller was on the toilet, so Wilbanks was concerned the baby was in the water. Alertly, she verified that the baby was safe. She then instructed the mother to find something to tie off the umbilical cord. The mother couldn’t move, so Wilbanks had to improvise.

That’s when her co-workers stepped up.

Wilbanks took a few seconds and shouted to her co-workers what her caller needed. Together, Wilbanks and the other emergency dispatchers began throwing out ideas of what this mother could find in the bathroom within her reach to use to tie off the umbilical cord. They came up with a brilliant idea: a ponytail holder.

It turned out the caller had such a tie in her hair, so she used it to safely tie off the cord.

Throughout the call, Wilbanks’ teammates and supervisor rallied around her and helped with this rare experience.

“It also helped because everyone in the comm. room was incredibly attentive and supportive during this call,” Wilbanks said. “We don’t get these types of calls every day, so there was definitely a buzz of excitement. My supervisor was right behind me during the whole call, and she was also dispatching the ambulance. She helped me by setting a timer for the three minutes we were watching the baby before tying off the cord.”

Shaken, Wilbanks stepped away from her console for a few minutes to compose herself after the intense experience. Her co-workers covered for her as she took some time to process what had just happened.

“There were plenty of people in the comm. room, so I was fortunate to be able to do that,” she said.

While baby delivery calls seldom happen at Johnson County 911, there’s always a family-like atmosphere in the center. During long 12-hour shifts and emotionally draining calls, Wilbanks appreciates that she can lean on her co-workers to pick her up or actively help with calls such as this one. She said this isn’t the type of job most people could do, especially alone. She’s fortunate to have caring, compassionate friends at work.

“I know I am the one who took this call, but I seriously could not thank my co-workers enough for their support that day,” she said. “They were behind the scenes, covering my radio frequency so I could focus on the caller, dispatching the ambulance, and just all around being a great team. We are like family, and they were just as much a part of this call as I was.”

Wilbanks won the Academy’s Call of the Week contest for this call. She was recognized on social media, received a certificate, and entered in a drawing for a $100 prize. This call also received attention from a local newspaper.