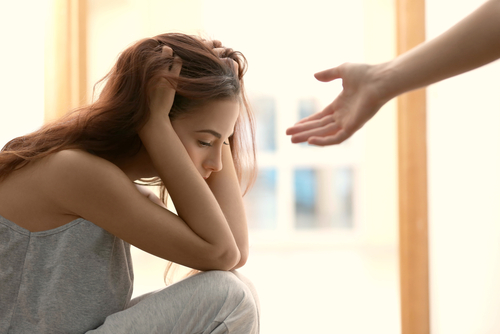 For Laura Spaulding, domestic violence is personal. She became interested in police work in order to protect victims like her sister who had been beaten by her husband while pregnant. Domestic abuse was something Spaulding saw the signs of as a teenager in the Georgia town where she spent her formative years.1

Spaulding recalled an incident in 2011 as a Concord (New Hampshire, USA) police officer where she and another officer responded to an apartment in the early morning hours on a report of a domestic disturbance called in by a third-party who heard a scream. While standing on the other side of a locked door, she heard a person come down the stairwell and open the door—running straight into Spaulding, who had her gun drawn. The woman was fleeing from her former boyfriend after he broke into the home, beat her, and tried to strangle her.2 Seeing this woman and what she had gone through reminded Spaulding of her commitment to help victims of domestic violence.

“One of the reasons I became a police officer was to protect victims, like my sister,” she said.3 “There are people out there who don’t know that this isn’t OK, that this isn’t normal life and that they don’t have to put up with it.”

According to the National Coalition Against Domestic Violence (NCADV), domestic violence is “the willful intimidation, physical assault, battery, sexual assault, and/or other abusive behavior as part of a systematic pattern of power and control perpetrated by one intimate partner against another. It includes physical violence, sexual violence, threats, and emotional/psychological abuse.”4

Police Priority Dispatch System™ (PPDS®) Protocol 114: Domestic Disturbance/Violence outlines some additional information about domestic violence. It is a “general term used to cover physical and mental abuse that occurs within the home and family.”

Breaking down the numbers

In 2012, Spaulding applied for a newly created position to become a domestic violence officer in Concord. She got the job and is a solo act, focusing on victim advocacy and community service. Daily, she looks through the police call logs from the past 24 hours identifying incidents when patrol officers documented domestic violence in a home.5 Spaulding also keeps a list of calls where children were present so she knows the number of secondary victims needing support services.

Looking through the call logs is no small matter for Spaulding. During each of the past five years, Concord police officers have responded to an average of 700 domestic disturbance calls. These numbers hold true for more than New Hampshire.

Domestic violence hotlines in the United States receive more than 20,000 calls each day, according to NCADV.6 Every minute, 20 people on average in the U.S. experience intimate partner physical violence. Each year, there are 10 million victims of domestic violence.

Statistics from UN Women show that an estimated 35% of women throughout the world have experienced physical and/or sexual violence by an intimate partner or have experienced sexual violence by a non-partner (not including sexual harassment) in their lifetime.7 More than half of the 87,000 women intentionally killed in 2017 throughout the world were killed by family members or intimate partners. This translates into 137 women being murdered every day by a member of their own family.

According to the World Health Organization (WHO), a 2013 analysis estimates that intimate partner violence ranges from 23.2% in high-income countries, to 24.6% in the WHO Western Pacific Region, to 37% in the WHO Eastern Mediterranean Region, to 37.7% in the WHO South-East Asia Region.8

As outlined above, women and men of varying ages and family situations experience domestic violence. NCADV says domestic violence exists in every community, affecting people regardless of sexual orientation, gender, age, socio-economic status, nationality, religion, or race. “The devastating consequences of domestic violence can cross generations and last a lifetime.”9

As an emergency dispatcher handling these calls, you might wonder why victims don’t always leave these situations when the violence continues. PPDS Protocol 114 Axiom 1 lists seven reasons why victims of abuse may choose to stay: economic dependence, children, emotional dependence, shame, social isolation, fear of reprisals, and lack of knowledge and access to help.

In her work, Spaulding is all too aware of reasons victims choose to stay quiet. In the case of the woman she helped in 2011, substance abuse was a contributing factor.10

“She was so concerned about talking to police because he [former boyfriend] told her he would have her arrested for drug possession,” Spaulding said, adding that she later told the woman, “I don’t care about that when someone’s life is in danger.”

According to New Hope, there are three phases of the cycle of abuse.11

Common phrases used by perpetrators include “It wasn't me; it was the alcohol/drugs,” “You know how to push my buttons,” and “I won’t do it again.”

Now that you understand more about what domestic violence is, the cycle of abuse, and how staggering the numbers are, let’s get into using the protocol to process these types of calls.

Rule 1 on Protocol 114 directs EPDs to use Protocol 113: Disturbance/Nuisance for disturbances not involving persons in a DOMESTIC or FAMILY relationship.

Once you are familiar with the difference between DOMESTIC and FAMILY DISTURBANCE, another thing you need to be aware of is determining whether this call is a COLD CALL. The PPDS defines COLD CALL as “A call for service involving a PAST event that does not require a full interrogation because, by the caller’s assessment, the suspect/person/vehicle is not in the area. Exceptions to this definition must be approved by local agency policy.”

Case Entry Question 6 asks, “When did this happen?” If needed, 6a, 6ai, and 6aii can help gather additional information to determine if this is a COLD CALL.

A COLD CALL incident requires only the Key Questions with the blue circle to be asked on Protocol 114. These Key Questions are Key Question 2 “Was the disturbance physical or verbal?” and Key Question 9 “Does anyone need medical attention?” If the answer to KQ 9 is yes, the EPD will ask, “How many?”

After asking these questions, the EPD will code the call as either 114-B-1 or 114-B-2, depending on the type of situation. There are four—potentially five—Post-Dispatch Instructions the EPD will provide the caller:

When an EPD takes a call for a domestic violence incident that’s happening now, the EPD will choose Protocol 114 and ask if weapons were involved or mentioned and more details about the type and location of weapons (if applicable). There are six Determinant Suffixes: C = Club, E = Explosive, G = Gun, K = Knife, M = Multiple weapon types, and O = Other. Rule 3 states that unless the caller says that he or she fears household utensils might be used as a weapon against him or her or someone else, these items should not be considered accessible weapons.

Something important to keep in mind while working through Protocol 114 is Rule 2: “DOMESTIC and FAMILY violence has the potential for escalation at any time.”

After dispatching, the EPD will return to questioning. Key Question 3 asks, “How many people are involved?” KQ 4 has several parts with the EPD asking where the suspect is now, information about how she or he left, a vehicle description, the direction the person was heading, and if it's known where the person was going. KQ 5 asks for the suspect’s description. After asking KQ 6, “Are you or anyone else in danger right now?” go to Protocol C: Caller in Danger (CID) if the caller says he or she is in danger. As an EPD, you can work to keep a caller in danger safe.

Protocol C asks questions about if the caller can safely relocate, if the phone can be taken with him or her, if the person can talk freely, and the caller’s exact location. After the EPD follows the panels, depending on the caller’s answers, he or she will stay on Protocol C or return to Key Questioning on Protocol 114.

KQ 7 asks whether children are present and if they are, their ages and where they are now. KQ 8 asks “Has anyone involved been using alcohol or drugs?” KQ 9 finds out if anyone needs medical attention and how many. If needed, a medical response can be sent at this time.

You are a lifeline

The next time you answer the phone, chances are high that it could be a call about a domestic disturbance. While your agency might not have a domestic violence officer like Spaulding going through the call logs, what you do makes a big difference to a caller while he or she is going through a challenging situation. Protocol 114 helps you navigate these situations so you are able to provide a lifeline to a caller who needs your reassuring voice and record-keeping skills while waiting for police to arrive.

Heather Darata enjoys looking at the small details. As Senior Copy Editor, she reads every word in the Journal. Sometimes, she writes words, too. Heather has been with the IAED for 13 years.