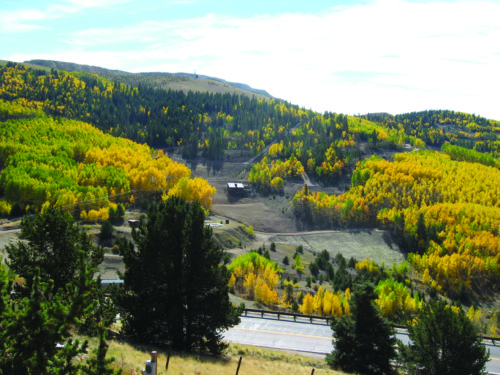 COMMUNICATIONS AT THE HIGHEST LEVEL

Scenic pullouts along an 18-mile winding road are breathtaking, and the numerous dirt trailheads cutting into the mountainsides are tempting to follow. Abandoned historic mining sites, Colorado blue spruce, and the occasional moose foraging at streams or in the tall grasses of meadows opposite the standing pines are sights not often seen by people living at sea level.

“Where is this place?”

Destination Cripple Creek (pop. 1,200), in central Colorado south of Pikes Peak, is every bit worth the drive, and you can ask just about anyone there to get the same answer.

“We love it here,” said Ellen Moore, who moved to Cripple Creek five years ago with husband, David. “We retired early because we didn’t want to wait any longer.”

Not everyone retires early; a lot of people never leave in the first place. Jobs in the once extremely prosperous gold mining region can still be found in retail (small businesses), the still-active though reduced in scale mining industry (Newmont’s Cripple Creek & Victor Mine), casinos (Cripple Creek approved gaming in 1991), tourism, agriculture and ranching, and city or county government.

Diann Pritchard is director of the Cripple Creek Police Department 911 center, which at an elevation of 9,494 feet might be the highest communication center in the continental USA. She applied for an open position in 1996, which was the same year the El Paso-Teller County 911 Authority instituted the Medical Priority Dispatch System (MPDS). For 23 years before that, Pritchard was a firefighter/EMT navigating emergency vehicles up and down some mighty twisty roads. She was the second woman Green Mountain Falls, Colo., hired as a firefighter/EMT.

Pritchard shows pictures of the scenic mountain view from her home’s front window as eagerly as someone else might pull up photos of kids or grandkids, do-it-yourself gazebos, or the “free-range” donkeys milling throughout Cripple Creek proper. The pampered donkeys, like most of the buildings and homes in Cripple Creek, are reminiscent of the golden days of mining.

The name “Cripple Creek” is, literally, quite by accident. One story has a cattleman and his assistant building a shelter close to a creek when a gun discharges, frightening a calf, which cripples its leg jumping over the creek. Another story has two brothers building their log house near the same creek; one brother falls from the roof and two days later their hired hand is thrown from his horse. The two suffer “crippling” injuries.

The communication center is on the first floor of police headquarters in a building that was originally a dry goods store and boarding house. The exterior is brick and, by law, the same goes for every commercial structure in the city’s mile-long downtown, rebuilt following a fire in 1896 that, in four days, destroyed two-thirds of the town and left 5,000 people homeless.

The police station is near the end of the business district, west of the casinos, antique shops, ice cream parlors, civic and administrative offices, museums, fire station, and Heritage Center at the city junction. Looking east toward Battle Creek Mountain is a view that gives people another reason to stay.

“You never get lost,” said the barista at a local coffee shop. “Mountains to the east, and the road through town running east to west, buildings north to south.”

Pritchard gets her exercise walking up the sidewalk to municipal buildings, dropping off subpoenas at Teller County courthouse, eating lunch with the police chief at the Pint and Platter restaurant (a local favorite), or bringing reports to city administrative offices. A national run of Hells Angels chapter representatives held in Cripple Creek in July demanded Pritchard’s full attention at the 911 center, managing EMDs and acting as the liaison of multi-jurisdictional law enforcement officers and the FBI.

“Things were quiet, peaceful,” she said. “But we were certainly prepared with more than a month’s worth of planning.”

The readiness is personified in the level of public services provided. Cripple Creek Police Department dispatch is part of the two-county El Paso-Teller County 911 Authority, comprising seven PSAPs and more than 200 EMDs. The combined call volume climbs each year and has nearly doubled from 168,900 to 354,262 calls since the authority was created in 1995.

The six EMDs on Pritchard’s staff are dedicated to quality assurance (QA), customer service, and all the other trappings that made the Cripple Creek Police Department 911 center an Accredited Center of Excellence (ACE) in April 2016.

Jesse Avery, Dispatcher II, Training Coordinator, and EMD-Q, led the process that took a year and plenty of hands pitching in to achieve.

“Our team worked hard for this,” Avery said. “They are motivated by what they do and dedicated to achieving the goal.”

They are also a community of EMDs to be envied and marveled, according to John Lofgren, Training Manager, El Paso-Teller County 911 Authority.

“Diann [Pritchard] and her team are the poster child of how to make ACE successful in a small community,” said Lofgren, who received the Academy’s Instructor of the Year Award at NAVIGATOR 2016. “They’ve embraced the protocol. For them, the ACE process was like throwing gasoline on a stack of dry wood and running with it.”

Three years ago, Lofgren was meeting with Pritchard and Avery on a regular basis as the authority’s QA analyst and, at that time, more than casually asked them about ACE.

“They were there, and it was now a matter of putting it all together,” he said. “I think it was a matter of affirmation. They needed someone to say, ‘You can do it. You’re there.’”

They agreed but hedged on the commitment.

“We thought about this for a long time because our compliance has been in the ACE range for years,” Avery said. “We weren’t sure who would have the time.”

As it turns out, Avery did or, at least, had the space to add yet another hat to her job description that already included records management, dispatch, quality assurance, and reviewing the 35 to 40 EMD calls each month. Lofgren, however, would no longer be their QA analyst. He was promoted to supervise the authority’s QA/Training Department, and the job of tending the ACE seed that Lofgren planted was now under the auspices of Ardelle Grima.

“Ardelle was instrumental in helping them maintain their scores and submit their ACE packet,” he said. “She really carried the ball over the goal line.”

There is camaraderie among EMDs and police officers. They know the casino owners, but not because of any gambling habit.

“They’ve explained the process to the casinos,” Lofgren said. “There’s a guy in security who knows the PDIs by heart. He can recite them.”

The EMDs peer-review calls, participate in four-hour training sessions on alternating Wednesdays, collectively test 100 calls in ProQA each month, and compete in their modified version of bingo. The first to blackout (covering all the squares representing Chief Complaints) wins a Thin Gold Line bracelet. The Thin Gold Line is a universal symbol for police dispatchers and signifies commitment to the officers and public they serve.

“They’re absolutely an integral part of emergency services in the community,” said Rulo, who has watched the evolution of MPDS through law enforcement jobs throughout the two-county area. “I am awed by their talent and collaborative effort. They do an amazing job.”

The Cripple Creek Police Department emergency dispatch center handles all police/fire/EMS calls within the 1.3-square-mile town and fire/EMS in neighboring rural jurisdictions. In 2015, they took 14,500 calls, of which many were related to tourists coming from lower elevations and experiencing the effects of higher elevations.