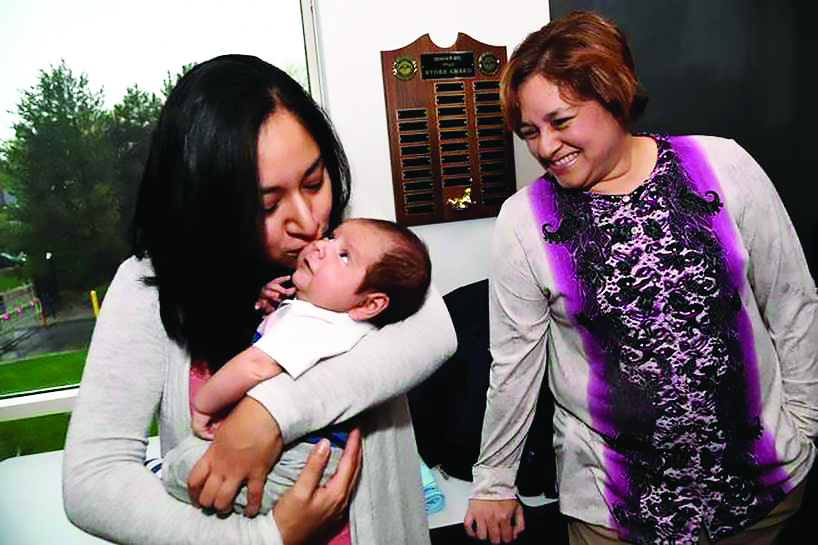 A stop for a fresh cup of coffee wasn’t part of the schedule for a soon-to-be grandmother and her daughter but, at least, they stopped at a most accommodating shop for the birth of baby Dominick.

The grandmother, Kristie Cardona, and her daughter, Marina Cardona, were driving along a business strip on April 7, 2016, when Kristie Cardona chose the only reasonable action considering the circumstances. She pulled the car off the road and into the parking lot of a Starbucks coffee shop and immediately turned her attention to her daughter in active labor on the passenger side.

“She’s broke her water, and she’s having contractions every minute, so I’m afraid I’m not going to make it there,” Kristie Cardona told Reba Rose, using her cellphone to call 911. “Like, she’s going to pop this baby out.”

Rose is an EMD for the Denver (Colo.) 911 Communication Center.

Ever try straddling the console of a car, balancing a cellphone between your shoulder and ear, and, at the same time, positioning yourself for a baby delivery? Fortunately, the potentially awkward scenario was turned around by Starbucks’ barista Rebecca Frisk. Midway through the call, Frisk came to the car, took the phone, and relayed Pre-Arrival Instructions (PAIs) from Rose to Kristie Cardona.

“They did great,” Rose said. “Mom pushed one time really hard and the baby was out.”

Frisk grabbed a clean towel from inside the shop to wrap the baby at about the same time lights-and-siren announced the arrival of paramedics. Mom and baby were transported to the intended destination (St. Joseph’s Hospital) where the new father was waiting.

“He had been there all alone,” Rose said. “The paramedics let him cut the umbilical cord.”

Five weeks after the call, the best was yet to come for Denver 911 Communication Center. Grandmother, mom, and baby were coming for a baby shower, which is a center tradition for babies beginning their entry into the world with a call to 911. As part of that tradition, Dominick and mom received unique keepsakes to support bragging rights to a story they will tell in the years to come: a copy of the 911 call and a “We make special deliveries” blue baby blanket.

“It was quite a celebration,” said Rose, an emergency dispatcher for a little more than 15 years. “They were really happy to meet us. They were grateful I answered the call.”

Rose was awarded the coveted Stork Award for her adherence to the EMD Protocol during Dominick’s birth, earning her a stork pin that she wears proudly on her lanyard, a certificate, a baby blanket, and an engraved name plate on the Stork plaque hanging in the center.

“It’s cool to be on the receiving end,” Rose said. “This shows we make a difference.”

Calls involving children, she said, are among the most memorable and the ones that can test her nerves of steel and ultimately prove the value of the Medical Priority Dispatch System (MPDS) in a crisis. Rose has helped deliver three babies since the center went live with protocol four years ago, and, in one of her most memorable calls, she helped save a 3-year-old boy choking on a rubber ball the size of a 25-cent machine gumball.

“The ball wasn’t coming out,” Rose said. “His breathing had stopped.”

Rose initiated PAIs for a child choking. A firefighter arriving on scene moments later reached down the boy’s throat and dislodged the ball. He was intubated and rushed by ambulance to the hospital. Rose visited, giving him a stuffed animal.

“The parents thanked me for saving their child’s life,” she said. “I said it wasn’t me. They followed the instructions. They did what I told them. They saved his life.”