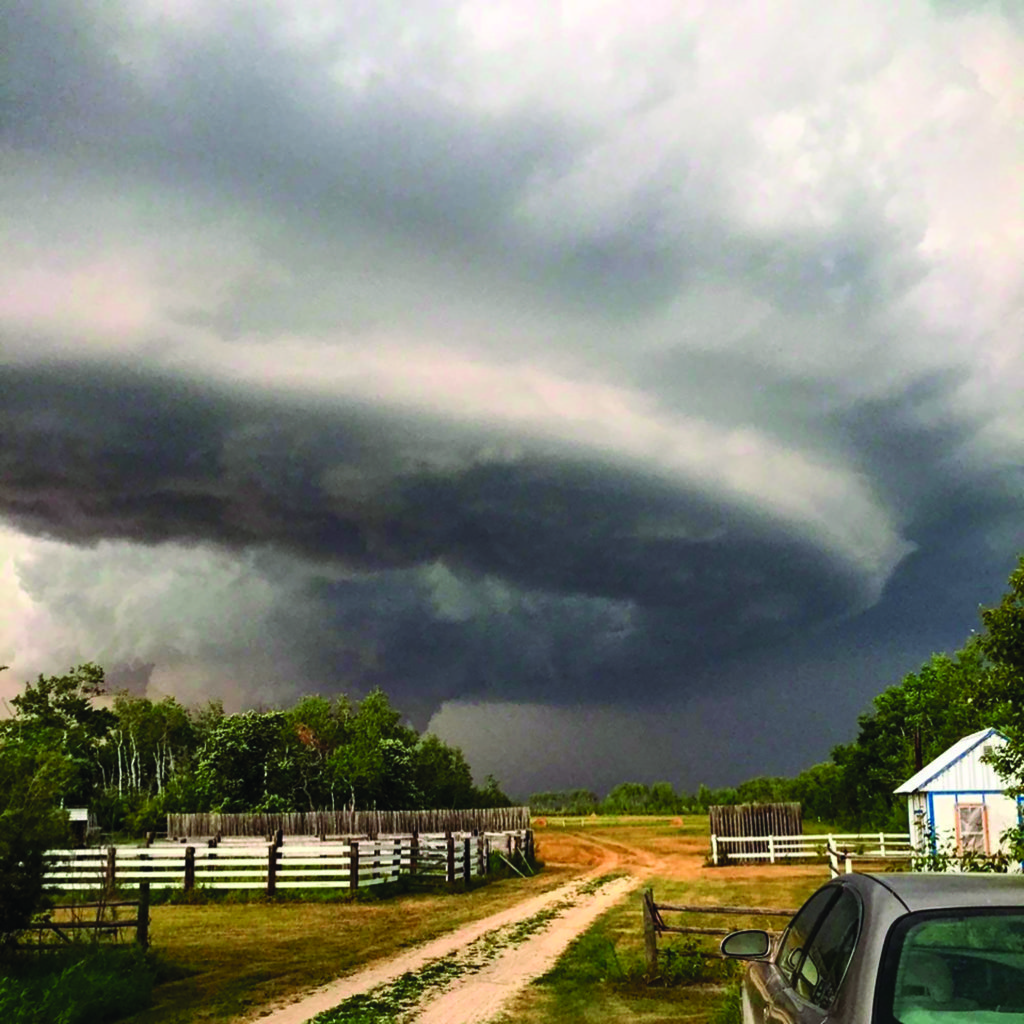 Jill Catagas was on the road, after work, driving to meet her husband and children at their RV parked in their favorite campground near Lake Manitoba, Canada.

She recalls nothing out of the ordinary about the drive. Heavy clouds forewarned a storm, but that was typical for the time of year. She knew the route well, having traveled this way often to spend long weekends among fellow camping enthusiasts, people they’d known for years.

Like most trips to the lake, Catagas anticipated a relaxing family-oriented get away while on break from her job at Medical Transportation Coordination Centre (MTCC), Manitoba, Canada. She started with the agency in 2006 and is the center’s administrative assistant.

Never did she realize that something was following her the evening of Aug. 3, 2018. Not until she reached the campground did she turn around to see the menance twisting behind her.

“I never suspected what was going to happen next,” Catagas said.

Darks clouds were rotating. Rain pelted the ground. Winds were picking up. Catagas saw a down spout coming out from the funnel cloud. The sky went from day to night. Sheltering was imperative. She alerted her family. From inside the RV, they had not known the extent of the incoming bad weather.

In seconds—but who’s counting—a caravan of 40 campers in assorted vehicles were tearing down the road to the closest home in this rural section of south-central Manitoba. The homeowner, also one of the campers, ushered everyone into the basement. The adults put mattresses over the children before hunkering down against a wall away from the small barely aboveground windows. The funnel cloud had touched ground. They were now in the path of a tornado.

The sound outside was like a million freight trains barreling toward the home, Catagas recalls. The frame of the house crackled. The foundation shook. At this point, Catagas draws a blank. Her ears ached from the increasing pressure. She simply wanted this to end. She was terrified for the people in the room, particularly the children protected by a thin layer of mattress.

A man at a window relayed the tornado’s proximity.

"He said the tornado was in the yard,” she said.

Then it stopped. The storm had passed. The adults decided it was safe to go outside.

The aftermath shocked them. The house was intact, but the yard was leveled, as if razed to the ground by a bulldozer. Trees were uprooted and, in some places, only a hole in the earth remained. The outbuildings were gone and so was the home of an elderly couple next door.

“We went over to make sure they were okay,” Catagas said. “They survived.”

The sky was tinged pea green, and rain continued to fall. They caravaned to the campground. There was little left of the place they had evacuated earlier that evening. RVs were demolished and some had been picked up and dumped into the lake. Debris hung from the few remaining trees and carpeted the ground. They went door to door of the remaining RVs to check on everyone’s safety. They asked each other “Where do we go from here?”

EMD Ava Grexton, dispatch manager on shift at MTCC, was supervising the communication center when the first call came in at 9:02 p.m.

“We all buckled down to assist,” Grexton said. “Twenty minutes later, EMS was on scene at the campground. Everyone was accounted for.”

The tornado, later categorized an EF4 (Enhanced Fujita Scale with winds speeds between 207–260 mph), caused the death of one man who was inside his home when it hit. Three patients were transported.

Catagas said campers have since worked to reclaim the area.

“We’re family now,” she said. “We’re working together to make good out of the bad.”