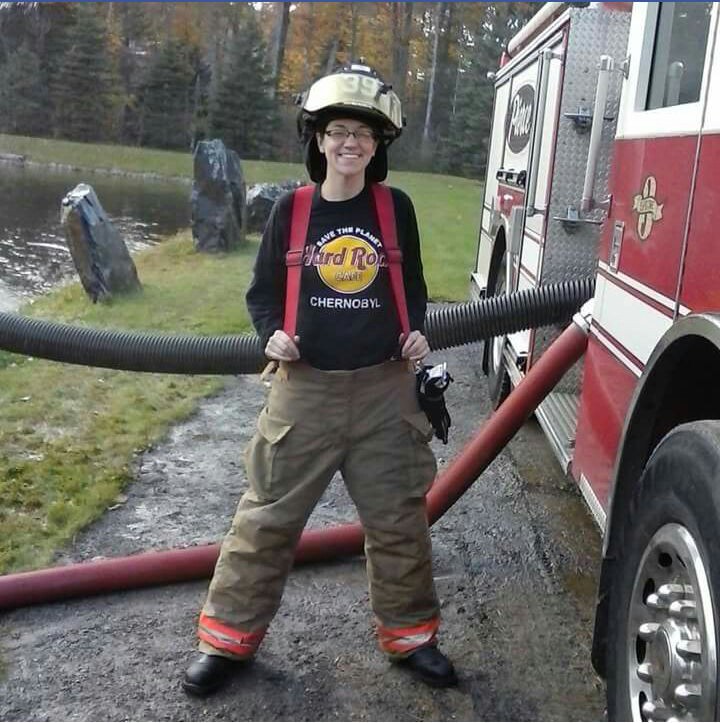 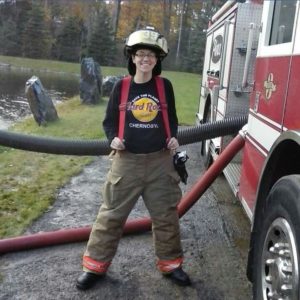 Kit Edwards doesn’t like to be bored. And she has the schedule to prove it.

The dispatcher for Franklin Regional Communications Center (FRCC) in Farmington, Maine, USA, works a rotating day schedule. She’s also a member of Jay Fire and Rescue, where she’s been a part of the department for two years—following a one-year stint about eight years earlier while a single mom to her daughter Evany (now 13).

“I love what I do now,” she said. “The job (dispatching) had come up. Mike mentioned it and thought I might be good at it. It’s been really crazy cool. I love the responsibility.”

Mike Booker is Edwards’ boyfriend of one year and a longtime friend. He’s also the Fire Chief and Reserve Police Officer in the town of Jay, Maine. Plus, Booker has a lawn care business that Edwards helped out with last summer. She occasionally works part time for My Dad’s Place, a local food hangout in Jay. Her past experience managing an Arby’s helps her as she does a little bit of everything from serving to cooking—all while making sure people have the best experience possible.

But if you thought work was enough to keep Edwards busy, you couldn’t be more wrong. Her daughter and Booker play a big role in what she does for fun, from target shooting, working out at the gym, and watching her daughter participate with her Maine FIRST Lego League robot team—The Clan of Mor’du.

Edwards and Booker started target shooting when Evany was 2 years old, and in May, the eighth-grader decided to give it a shot. Edwards sees it as a great stress reliever and has several favorite rifles to shoot with including her 1912 Chilean Mauser (the first gun she bought), which doesn’t have a scope, and the Remington Model 870 pump shotgun given to her by Booker.

“It was just so fun,” she said. “I don’t know why. It’s like a challenge—how far away can you shoot? You get zoned out because you focus on your target.” 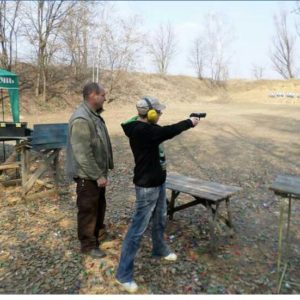 Edwards looks for additional ways to relieve stress. Her desk at FRCC allows her to stand up to work, and her center is working on getting treadmills that fit under the desks. But Edwards takes it a step further and visits her favorite hole-in-the-wall gym, sometimes with Evany and Booker. When she started doing pump training for the fire department and needed to be able to pull levers by herself, the gym became a place she decided to frequent, particularly for weightlifting. It helps after coming off a shift at FRCC too.

“If you’ve had difficult calls, there’s something about doing that that’s letting all of your energy out,” Edwards said.

Evany enjoys exerting energy working with Legos as part of a team that builds robots while exploring science, technology, engineering, and mathematics. Edwards recently traveled to St. Louis, Missouri, USA, with her daughter for the annual FIRST Championship. The Clan of Mor’du built a robot to perform on missions and also completed a separate project. For their project, the team researched information on beehives and bears to come up with a solution to help bees without hurting bears. They decided to use waves to deter bears from attacking beehives because when bears go for the honey, they kill the hive.

“The Lego thing was really, really cool,” Edwards said. “It was incredible. Such a great feeling of people coming together that normally wouldn’t. The kids are so mature.”

Whether it’s taking a trip to a Lego competition, target shooting, or weightlifting, Edwards moves at a fast pace outside of work.