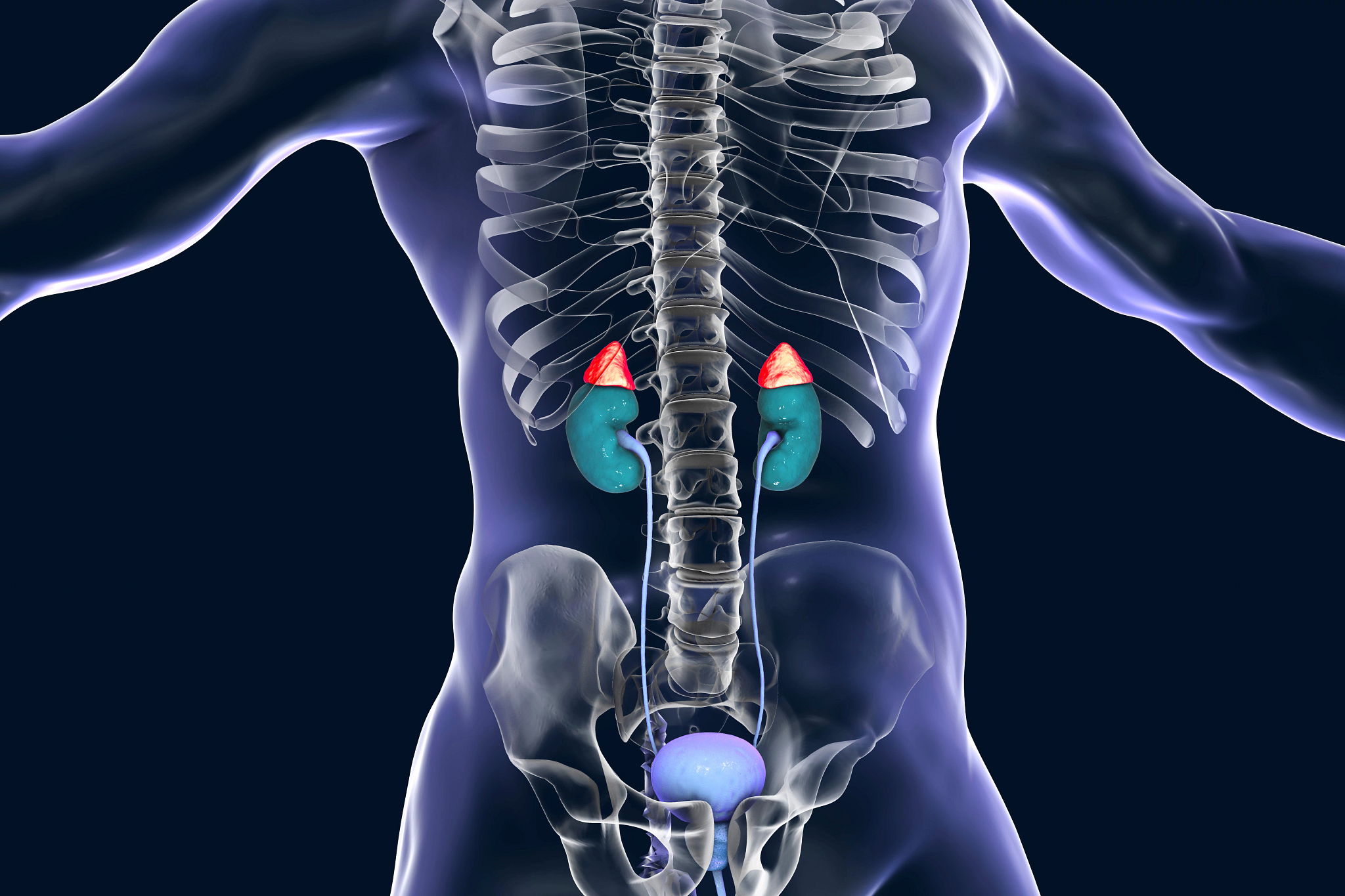 In a recent ProQA® maintenance release (v5.1.1.44), you may have noticed an addition to Protocol 26: Sick Person (Specific Diagnosis). The answer options for the Key Question “Does s/he have any pain?” now include this answer choice: “Acute adrenal insufficiency/crisis or Addison’s disease.”

Cause
Sitting on top of the kidneys are two small adrenal glands that produce two essential hormones: cortisol and aldosterone.1 Addison’s disease is a rare disorder of the adrenal glands in which damaged glands do not produce enough aldosterone or cortisol.

About 75% of cases of Addison’s disease occur when the body’s immune system attacks the adrenal glands, causing continual damage to the adrenal cortex—the outermost layers of the glands that secrete cortisol and aldosterone.2 This is referred to as primary adrenal insufficiency.

If the adrenal glands are undamaged but still unable to produce aldosterone or cortisol because of other reasons, such as pituitary gland abnormalities, this condition is called secondary adrenal insufficiency.

Affected populations
According to the National Health Service, about 9,000 people have Addison’s disease in the U.K., with more than 300 new cases diagnosed yearly.4 It more commonly occurs in individuals between 30 and 50 years old.

The National Organization for Rare Disorders (NORD) reports that about 1 in 100,000 people in the U.S. has Addison’s disease, but notes that because cases may go undiagnosed it is difficult to know the true frequency.5

Symptoms
Symptoms characteristic of Addison’s disease are caused by the low levels of cortisol and aldosterone in the body. Cortisol affects the way the body responds to stress and is released in larger quantities when someone is under stress. It also helps with cardiovascular function and maintaining blood pressure, assists in controlling blood sugar levels, and aids in regulating the amount of water in the body. Aldosterone affects the potassium and sodium ion equilibrium in the body and helps to maintain water levels.

According to NORD, Addison’s disease symptoms often develop slowly and are common to many conditions, making it more difficult to properly diagnose. While rare, symptoms can develop quickly, causing acute adrenal failure. Symptoms often do not  develop until 90% of the adrenal cortex has been damaged.

Common symptoms include fatigue and developing patches of skin that are darker than the skin surrounding them (hyperpigmentation). The discoloration happens around scars, near skin creases such as the knuckles, and on mucous membranes like the gums. While skin abnormalities do not happen in every person with Addison’s disease, they can start months or years before the development of other symptoms. A person with Addison’s disease may have black freckles on their forehead, face, or shoulders, or they may develop vitiligo—white patches on different areas of the body.

Gastrointestinal symptoms may include nausea, vomiting, or abdominal pain. Often those affected may have a poor appetite, unintentional weight loss, muscle weakness, or progressive fatigue. Joint pain, muscle pain, and muscle spasms can occur.  Dehydration is also possible. Low blood pressure can cause dizziness or lightheadedness when standing up. Addison’s disease has been linked to poor concentration, irritability, and depression. Cravings for salt or salty foods can occur, as well as low blood  sugar levels.

Treatment
Medicine that replaces cortisol and aldosterone can be prescribed to replace what the body is no longer making. Individuals with Addison’s disease can monitor their blood pressure, weigh themselves regularly, make sure to get enough salt in their diet, and  have regular checkups with their doctor. They can also keep a shot of emergency medicine with them to use in times of high stress.6

An Addisonian crisis is a medical emergency that can cause life-threatening complications, including kidney failure or shock, when left untreated.7 As mentioned previously, symptoms can occur suddenly—a condition called acute adrenal failure or an  Addisonian crisis. When this occurs, an individual may experience severe pain in the lower back, abdomen, or legs; a sudden loss of strength; low blood pressure; loss of consciousness; or vomiting and diarrhea, which can cause dehydration.

Additional symptoms can include a high fever, feeling weak or lightheaded, or feeling fearful, confused, or restless.8 A crisis is usually set off when an individual is under extreme stress such as when a severe infection, trauma, surgery, or dehydration causes adrenal crisis.

In-hospital crisis treatment may include an immediate hormonal investigation and intravenous administration of high-dose hydrocortisone and fluid and electrolyte replacement.9 It’s also possible the patient might need a short course of vasopressors to  maintain blood pressure.

Patients with adrenal insufficiency often carry an emergency steroid injector that can be lifesaving. An ambulance may be summoned during a crisis if the medication is unavailable or ineffective. According to Brett Patterson, IAED™ Academics & Standards  Associate and Chair of the Medical Council of Standards, because these patients may not initially present with Priority Symptoms, the new Protocol 26: Sick Person (Specific Diagnosis) answer choice and Determinant Descriptor provide a unique placeholder to accommodate a locally assigned response option.

Protocol 26: Sick Person (Specific Diagnosis)
The call comes in for a 35-year-old patient experiencing back pain, vomiting, diarrhea, and low blood pressure. The caller volunteers that his wife has Addison’s disease. The patient is awake and breathing.

“We expect most callers will identify it themselves if they have a history of the disease—similar to a diabetic patient knowing he’s having an insulin reaction,” said Greg Scott, IAED Associate Director of Protocol Evolution.

The EMD finishes Case Entry and selects Protocol 26: Sick Person (Specific Diagnosis) because of Rule 7, which states: “The complaint of acute adrenal insufficiency, adrenal crisis, Addisonian crisis, or Addison’s disease, should be handled on Protocol 26.”

More information about Addison’s disease and adrenal insufficiency is in Axiom 5, which states, in part, “Emergency treatment includes hydrocortisone (an injectable corticosteroid), that these patients often carry in case of crisis. This condition requires a  prompt response and patients should be advised to do what their doctor has instructed for these situations.”

The EMD goes through several Key Questions, including “Is she responding normally (completely alert)?”, “Is she breathing normally?”, and “Is she bleeding or vomiting blood?”, and selects the appropriate answers. When it comes to the KQ “Does she have  any pain?”, the EMD chooses “Acute adrenal insufficiency/crisis or Addison’s disease.”

If the patient is responding normally, breathing normally, and not bleeding or vomiting blood, the EMD chooses Determinant Code 26-C-5 “Acute adrenal insufficiency/crisis or Addison’s disease.” After dispatching responders, the EMD provides the Post-Dispatch Instructions: “I’m sending the paramedics (ambulance) to help you now. Stay on the line and I’ll tell you exactly what to do next” and, when appropriate, “(Patient medication requested) Remind her to do what her doctor has instructed for these situations.” Then the EMD proceeds to Case Exit instructions.

Conclusion
While rare, acute adrenal insufficiency/crisis or Addison’s disease is a medical emergency that requires a timely response. As you better understand what this is and how to use the protocol to help, you can assist a patient going through a highly stressful situation. Remember, the care and compassion you provide is life-changing to those on the other end of the line.