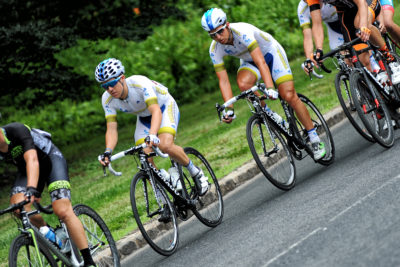 Elite bicycle racing is an exacting sport. Focus is paramount at average riding speeds of 40 kilometers per hour (24.8 miles per hour) over long and arduous staged rides while competing against dozens of other riders. Crashes happen in a moment’s inattention. Overlaps at corners. Accidentally clipping over eager spectators. An eddy of gravel washed up at the turn.

One distraction, a momentary fatigue, or a slippery painted line can ignite a domino reaction that radiates outward, expanding until someone’s down and taking others with him.

It’s no wonder the reaction professional cyclist Stephen Clancy prompted in a breakaway during an international race when he took from his pocket what looked like a cellphone.

“One of the other riders came alongside me and, with a look of astonishment on his face, said he couldn’t believe I had taken my phone with me during the race and that I was using it,” said Clancy, a member of the international pro cycling team, Team Novo Nordisk.

The device wasn’t a phone. Clancy had pulled out a pocket-sized blood glucose monitor. It’s something he does every 20 to 30 minutes while racing or training on his bike.

“At first, it was strange to have to closely monitor everything,” he said in his biography on the Team Novo Nordisk website. “I didn’t mind doing it. It was just a new experience and a change of routine.”

The change in routine gives Clancy the edge in pursuing his dream. The 24-year-old road racer from Limerick, Ireland, is a professional cyclist who happens to have Type I diabetes. His pancreas does not produce insulin, the hormone that ushers glucose from the bloodstream into the cells of the body. Formerly known as juvenile diabetes, the condition generally carried the doctor’s warning: It’s probably not a good idea to play sports.

Clancy was diagnosed at age 19 when, at the time, he was establishing his name in bike racing. Athletic as a youngster, he decided to focus on cycling while still in high school, winning his first race, a time trial, at age 16. He won the coveted Best Domestic Rider in Ireland Award in 2011 and was recruited by Ireland’s best domestic squad, Dan Morrissey-Speedyspokes.

He was elated and pushed hard against the presumptive indication of a routine blood test at training camp revealing abnormally high levels of sugar in his blood. It was suggested that he might have diabetes. He let it go.

By opening season 2012, symptoms of the condition, however, were presenting. He was losing weight despite a ravenous appetite. He was always thirsty and urinating more frequently than normal. His mouth was chalk dry.

An endocrinologist did further testing. The initial blood test was not a false positive. Test results confirmed a diagnosis of Type 1 diabetes.

“After the diagnosis, I didn’t know what was possible,” Clancy said. “My medical team [at the hospital] said it would be difficult to compete at such high levels.”

Clancy was told that extreme levels of exercise could cause further complications and he was advised to keep his cycling distances to a mile.

“Do you know what a mile means?” he said during a phone interview two days before the start of the Larry H. Miller Tour of Utah (Aug. 1–7). “That’s nothing.”

Clancy was devastated at the warning but not willing to give up the sport in which he shined. He contacted a team he had heard was exclusive to riders with Type I diabetes and was invited to a three-week development training camp. At its conclusion, in the summer of 2012, he signed a professional contract.

Clancy is now a full-time pro cyclist on Team Novo Nordisk, created in 2012 through a partnership between Phil Southerland, CEO and Co-founder of the team, and Novo Nordisk, a pharmaceutical company based in Denmark.

Clancy concentrates on training, nutrition, and living out of a suitcase as part of the top riders representing Team Novo Nordisk. He was home six days in the three months leading up to the Tour of Utah, a seven-stage race attracting teams from around the world to compete against a backdrop of canyons and mountains, with plenty of hill climbs and descents.

“It ain’t going to be easy,” Clancy said during the same phone interview. “We’ve trained specifically for this race to make sure we arrive with very strong legs.”

Justine Boyd Lyons, RN, is the team’s nurse practitioner and the diabetes nurse educator for the development and junior teams with Team Novo Nordisk. Lyons worked in clinical research at Boston Children’s Hospital prior to joining the Team Novo Nordisk staff in 2012, and before that, from 2004–2007, she was a research coordinator at the Joslin Diabetes Center in the Longwood Medical and Academic Area in Boston, Mass.

Lyons is among the medical staff rotating through the team’s race schedule to monitor the professional team riders. The traveling specialists check team members’ blood sugar levels 30 minutes before a race and follow the riders in a support and gear (SAG) vehicle equipped with supplies, such as therapeutic intervention (insulin) and cold soft drinks. In case of an accident, the rider’s blood sugar level is checked immediately and, if necessary, 911 is notified for response.

Lyons doesn’t downplay the vigilance required to safely and confidently race at the intensity of professional cyclists. Management plans change according to level of exercise, stress, overall health, and even the weather. Cyclists must always pay attention to how their bodies react to the different variables and make the necessary adjustments to medication and food to ensure a healthy target range.

“We have learned from the experiences,” she said. “They are incredibly successful at what they are doing and some thought it was not possible.”

The success, however, supersedes the diagnosis. They are cyclists first. They train and compete against the best teams in the world.

“They are racers living with diabetes,” Lyons said. “They’re top athletes in a very intense sport. They can pursue their dreams.”

Team Novo Nordisk has set a goal of 2021 for the famed Tour de France. It will be the 100-year anniversary of the invention of insulin.